One of the reasons Oracle has become a leader in database technology is the flexibility of their tools and utilities that allow a database to grow from one used by a small department to one more suitable for a giant multinational. The company offers a wide array of tools and techniques for database scaling, but it has always been the challenge of the IT manager to apply these tools at the proper times to ensure seamless growth, while keeping hardware investments to a minimum.

Even though hardware prices fall by an order of magnitude every decade, the investment in computing resources remains a large, critical expense that requires careful management. Hardware depreciates regardless of use, so a too-much, too-soon approach can be wasteful. On the other hand, waiting until the system experiences stress-related response time delays is also bad, especially since today's end-user community has very little tolerance for sluggish response time.

The overall goals for any IT manager are twofold: maximize end-user satisfaction while minimizing expenses.

There are many proven techniques and approaches for ensuring your success in a rapidly growing database:

While this may seem self evident, we must remember that the stakes are high, and hundreds of millions of dollars are riding on an IT manager making the right decisions for any mission critical database.

When designing Oracle systems, it's important to remember that we must understand a few very important realities:

Now that we see the basic concepts, let's examine a proven approach for scalability, the scale-up, scale-out approach to infinite growth.

While Oracle has a host of tools that facilitate scalability (online reorganization tools), Oracle RAC is most commonly associated with scalable Oracle solutions.

RAC is marketed for two purposes, scalability and continuous availability. While RAC is a superb 24 by 7 availability solution (when used in conjunction with other redundant components), using RAC for scalability is widely misunderstood.

It's important to know that RAC only prevents outages that are due to an Oracle instance failure and a complete High Availability solution also requires redundant disks and other hardware components.

Where RAC shines is its ability to quickly add an entire server to a cluster, thereby adding horsepower without effecting end-user response time. Oracle RAC Grid control is not just for adding database resources. By using pre-loaded servers, you can use Oracle grid control to add servers to any layer in the architecture, adding servers to the Web server, application server or database server (Figure 1): 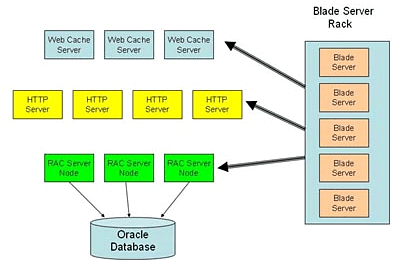 To achieve seamless growth, you need to be able to start with a server environment whereby additional computing resources can be added without service interruption. You must be able to add RAM, CPU's and disk as the workload grows. Eventually, you will saturate the capacity of even the largest single server, and then you start the scale-out process, adding additional servers to accommodate your growing workloads. Let's start by understand how scale-up (vertical integration) works with Oracle systems.

In the "scale-up" approach, server resources (CPU, RAM, Disk) can be added into a single, monolithic server, which can have slots for up to 64 CPU's and over 256 Gigabytes of RAM. Examples include the HP Superdome (64 CPU), the Unisys ES-7000 Series (32 Processors), the Sun Microsystems SunFire and the IBM X and Regatta class servers.

Adding resources to a single server frame is simple and effective because machine resources (especially CPU) are instantly available to the growing application. The scale-up approach is simple and yields immediate benefits, without the complexity of the scale-out approach:

But we cannot "scale-up" forever, and as our processing demands grow, we need to look at the scale-out, the "horizontal" integration of many large servers in a RAC cluster environment.

Grid vendors offer solutions where server blades can be added to Oracle as processing demand increases. While grid computing offers infinite scalability, no central point of failure, and the use of fast, cheap server blades, it does have the same in-the-box parallelism that is found within a monolithic server. Unlike the scale-up approach, Oracle 10g Grid computing is not automatic and requires additional costs, additional training, as well as sophisticated monitoring and management software.

The "scale out" approach is designed for super large Oracle databases that support many thousands of concurrent users. Unless the system has a need to support more than 10,000 transactions per second, it is likely that the system will benefit more from a scale up approach.

In the real world, savvy corporations combine vertical scalability and horizontal scalability. They start with a large vertical architecture server, adding resources as needed. If continuous availability is also required, they may have a mirrored server using long-distance RAC or Oracle Streams.

When the single server is approaching capacity, it is time to "scale-out" with horizontal scalability employing RAC and adding additional servers, each with a vertical scaling architecture.

For these huge shops that rely on on-demand server allocation with Oracle Grid control, we see the ability to gen-in new servers on an as needed basis.

In the real world, savvy corporations combine vertical scalability and horizontal scalability. They start with a large vertical architecture server, adding resources as needed. If continuous availability is also required, they may have a mirrored server using long-distance RAC or Oracle Streams.

The scale-up and scale-out approaches are simple in concept, but most difficult to deploy in practice. A common misconception is that everyone will need to eventually scale-out. However, in the real world, very few applications have workloads that saturate the capacity of the million dollar servers with CPU's and hundreds of gigabytes in RAM.

The scale-out approach using RAC and grid control are designed for super large Oracle databases that support many thousands of concurrent users. Unless a system has a need to support more than 10,000 transactions per second, it is likely that the scale-up approach will be more than adequate.

Amazon is an excellent example of a scale-out Oracle shop. Amazon announced plans to move their 14 trillion byte Oracle database to Oracle RAC on Linux and Amazon uses load-balanced Linux Web servers to horizontally scale its Web presence to millions of connected users.

Remember, large-scale RAC databases use large servers, each with 32 or 64 processors and over a hundred gigabytes of RAM. As the capacities of the large servers are exceeded, a new server is generated into the RAC cluster.